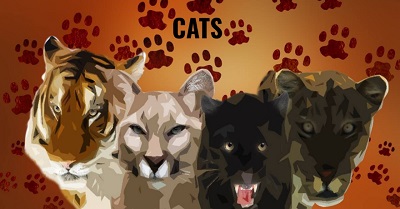 There is an ancient proverb which states that "Cats have Nine Lives". For three he plays, for three he stays and for three he strays. Well these Cats have certainly stayed to play and remain a fan favourite in the DoubleDown Casino. With a dozen or so slot games featuring felines, I dare to say we have some cat lovin players out there. These Kitties are not found on grandma's sweatshirt as they are the Big Cat version. Panthers, Lions, Tigers, Cheetah's and Cougars roam the Savanna Grasslands of Africa and roar when we win. This majestic game is found in the Popular Slot Lobby.

Cats is played on a 5 x 3, 30 payline format. Wins are from left to right. The Mobile Version plays very smoothly.

The Cats Logo is Wild and substitutes for all Symbols except for the Scatter. The logo doubles when paired with one of the Cats to make an easy 3 or more of a kind. For example, 2 Single Panthers and 1 Cat Logo = 4 Panther Symbols

There are 4 Face Cards or Ace, King, Queen and Jack

There are two Scatter Bonus Symbols. A Single Paw Symbol and a Double Paw Symbol, which counts as two.

5 Paws triggers 5 Free Spins in the Bonus Round

6 Paws triggers 10 Free Spins in the Bonus Round

Whatever you win, you spin as there isn't a re trigger feature in this bonus round.

A wild drum beats a tune and as you win the Cats Roar! The best sound is the chiming of your balance increasing as wins are awarded. Big Wins are highlighted courtesy of a friendly panther.

Cats has become a DoubleDown Classic of sorts as it has been on the menu for quite a while. Even if you are a devoted "dog person" you must give Cats a nip.