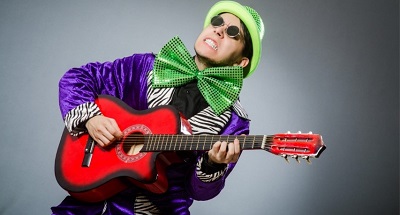 With a blend of Rock 'n' Roll and the Luck of the Irish, ShamRockers is a March favourite for those of us looking for a slot to accompany our frosty mug of green beer. Designed for St. Patrick's Day fun, IGT added a funky twist to an Irish themed game with some colourful characters. The band of 4 rocking Leprechauns play on a rainbow stage offering 20 paylines set over 5 x 3 reels paying left to right. IGT added the "Dynamic Stack Feature" to ShamRockers. On every spin, a random symbol is chosen to be stacked. (full reel of the same symbol). 5 stacks equal a great payout or pot of gold if you prefer. The concert includes some great guitar riffs and an enthusiastic audience that cheers you on.

The lead singer is the highest paying symbol, (aren't they all?) and looks a little like a Ginger Elvis. He pays out 500 x for five.

The guitarist who may be a doppelganger for a famous Beatle, "Imagine" who, pays out at 250 x for five.

The drummer, a cool Pat Benatar type, reels in 100 x for five

Finally, the fiddler who actually looks like a leprechaun playing a fiddle pays 75x for five.

The Ace, King, Queen, Jack and Ten back up the band as well. These symbols pay from 30x to 20 x for five of a kind.

The "Wild" is the Shamrock or three leaf Clover. It applies to all symbols except for the bonus. The three leaves are said to represent Faith, Hope and Love but here they mean win, win and win!

I love a holiday themed slot and so does DoubleDown. Their lobby is full of clovers, horseshoes and pots of gold this time of year. I hear an Irish Jig calling me and maybe a few spins with the ShamRockers.