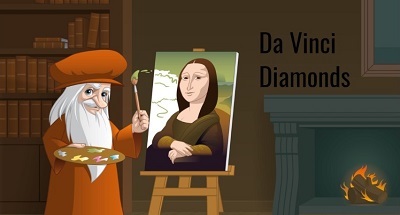 Da Vinci Diamonds plays homage to Leonardo Da Vinci. (Not the Ninja turtle, but the artist, scientist and inventor of the Renaissance Period). Mona Lisa, Portrait of a Musician and Lady of Ermine, famous artistic works of Da Vinci, make up three of the nine symbols in this 3 x 5-reel slot. Great choices, although the man did invent the helicopter, parachute and armoured vehicle. Imagine the game with tanks? Never mind. The Da Vinci Diamond Logo, Red, Green and Amber Gemstones, Wild and Scatter make up the rest. This slot is a graphic lullaby. Very smooth and easy on the eyes.

Da Vinci Diamonds, created by IGT, was the first to introduce the "Tumbling Reels" feature. Let me explain. Each winning combination initiates the tumbling feature. The winning symbols disappear and are replaced in sequence with new symbols tumbling from above making multiple wins possible on each spin. (That famous candy game utilizes this too) The feature remains triggered until no winning combinations are generated. All that loot is then added to your balance that has been gathering in the win meter!

The Wild can be applied to every symbol but the Scatter. You want 5 Da Vinci Diamond logos for the big win. Mona Lisa, Portrait of a Musician, Lady of Ermine, Red Gem, Green Gem and finally Amber Gem are listed in order of value. Maybe if Mona knew that her beautiful face was going to grace a slot machine her smile would have been a little wider.

Bonus Time! Three Bonus Scatters on reels 1, 2 and 3 triggers the fabulous Bonus feature. 6 Free spins are won, along with another fabulous Medieval tune. The tumbling feature is included in the bonus as well, which can turn six free spins into many more! The Bonus symbols include three different Portraits of Da Vinci's. These ladies are easy, wink wink as you can win with three of a kind, scattered anywhere. You can also re-trigger the bonus with 3 or more Scatters, 2-15 free spins are added and can total all the way up to three hundred freebies and with the tumbling feature can mean... well you do the math!

All in all, Da Vinci Diamonds is quite simple to follow. You need three of a kind, paying from the left to win. 20 paylines and cheery Medieval tunes makes this a very mobile friendly slot. Originally designed for land-based casinos its immense popularity made it a must for on-line play and as with any success story, a sequel was in order. Da Vinci Diamonds Dual Play was created with a tumble thru feature! Tumble thru you ask? More on that later.